skip to main | skip to sidebar

I was interviewed by Senthil Mimicry on Raj TV during this show.

Posted by EVENT MANAGER SHANTHAKUMAR at 10:48 AM No comments:

Posted by EVENT MANAGER SHANTHAKUMAR at 10:43 AM 2 comments:

I gave this performance in Humour Club, T.Nagar, Chennai southern part of India.

shanthakumar and humor through ventriloquism 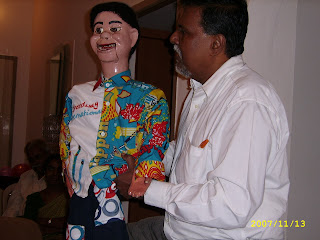 AN INTERVIEW WITH A VENTRILOQUIST
It is heartening to note that Vent. Shanthakumar had given more than 1500 programme of ventriloquism in Humour Clubs, Schools, Colleges, Birthday Parties, Recreation Clubs, Weddings, Churches, Orphanages, etc. He has got three dolls of young boys, two monkies, a crow, a dog and a girl puppet and also a Magic Board. Here is his interview:


Editor: How did you get the idea of learning ventriloquism?

Vent: Well, I have seen a live ventriloquism programme of Mr M M Roy in early seventies at Music Academy. At that time, as I didn’t know anything about ventriloquism, I could not decipher from where the voice was coming. After seeing Kamal Haasan’s movie, “Avarghal”, I was really fascinated by the art. In 1998, again I had the opportunity of seeing Mr M M Roy’s programme in a Humour Club. Immediately I approached him to find out whether he would teach me. When he said yes, I seized the opportunity.

Editor: How much time it took for you to learn the art?

Vent: I have taken roughly 8 months’ time to learn it. I am giving performances during the last ten years.

Editor: Tell us something about your master, Mr M M Roy.

Vent: He is a professional ventriloquist. He has done more than a lakh shows. He has helped in not only teaching and grooming me but also in getting programme. He is the best ventriloquist in India. We are friends now.

Editor: Throwing your sound without lip movement is very difficult. Is itn’t?

Vent: Not only that… When I throw the sound without my lip movement, I should manipulate the doll as if it talks and I should respond immediately. When I talk, I should make the doll respond to make it live.

Editor: What are the names you have given to the dolls and puppets?

Vent: Johnny (doll) and Genie (myself); Crack and Jack (myself and monkey) and Rani (girl puppet). But in Chutti TV, they named doll as Tinku, monkey as Monku, Rani as Rinku and crow as Blacku. Recently I purchased a dog (Chocolate and myself as Charlie) and a Magic Board from abroad.

Editor: It seems, you have given more than 1450 shows during this short period. Who were the VIPs that enjoyed your programme?

Editor: Who is preparing your scripts?

Vent: I myself. I have attended Humour Clubs for more than a decade. Apart from that, I have got a collection of roughly 100 joke books—both foreign and inland. So I can select the best and the most appropriate jokes for each occasion. I also give continuity while preparing the script to make it natural.

Editor: What is the specialty in your programme?

Vent: When I start the programme, I used to talk about the chief guests in an interesting manner. That’s called Adlib.

Editor: Can you give an example?

Vent: When I saw Mr Thenkatchi Swaminathan in the dais, I told the doll, “He is Mr. Thenkatchi Swaminathan”. The doll asked, “When did he start a new Katchi (Party)?” There was a burst of laughter from the audience. Similarly, when I asked about Mr Chaaruhaasan, the doll replied, “He is Mr Chaaruhaasan, brother of Mr Kamal Haasan”. I asked, “How do you know Mr Kamal Haasan?” The doll replied “I know him because I acted with him in Avarghal!” Everybody laughed. Another specialty in my programme is that I used to wind up my programme with question and answer show, i.e. kadi jokes as well as intelligent jokes with children. I also offer a song with each doll.

Editor: While eliciting answers from children, was there any funny incident?

Vent: Yes, when I gave a programme for Jaycees Club at Chennai, I invited a young boy. I asked him “If a hen lays an egg a day, how many it will lay in a week?” He said “Ten!” I asked him “How?” He replied innocently, “On some days, our hen lays two!” Everybody including his parents had a hearty laugh.

Editor: Have you given any programme in TV?

Editor: Did you try anything different in ventriloquism?

Vent: Yes. Recently, I started using two puppets simultaneously by giving two different voices. I also introduced a voice from below the platform and it is called Distant Ventriloquism.

Editor: What is your achievement?

Vent: After the programme is over, some people ask me whether I am using any tape inside the doll. I am also doing ventrilomagic… i.e. doing some magic with the doll.

Editor: What is your future plan?

Vent: I want to use “Minus 1” (Caroke) cassettes in my programme to make the songs effective. I practise with two sticks tied with two hands of the puppet to improve its body language. I also purchased a magic plate from USA, where I can draw a face and its eyes and lips will move as per my manipulation. Further, I want to exhibit my programme through website.

Editor: Well, will you teach this great art to our readers?

Vent: Why not? I would be happy to teach to your readers but they should have genuine interest. Already I taught three persons.

Editor: Wish you all the best in all your endeavours!

Vent: Thank you very much for your encouragement because that will help me do great things in future.
Posted by EVENT MANAGER SHANTHAKUMAR at 7:02 AM 2 comments:

Labels: Interview with some photos
Home
Subscribe to: Posts (Atom)